QuickBooks Enterprise is the system used by the Regnum Christi Federation sections and localities.

USE OF CLASSES IN QUICKBOOKS

QuickBooks classes will be used to streamline the chart of accounts while allowing for individual accounting (P&L and B/S) of each cost center.  The following are the standard cost centers (i.e. classes) in a section or locality.  Additional classes may be requested by contacting the RC Activities National Office:

Other examples of classes (where you may want to produce a profit and loss):

Sub-Classes may be used to sub-divide the above classes, for example: in NY’s Tri-State locality, two sub-classes could be created under RCM, NYCT & NJ to better reflect how they are organized in the Tri-State locality.  Under Events, possible sub-classes could be: Feast of Christ the King, Dinner for Priests or basically any event you would want to know how profitable it was or that has a budget owner.

Revenue is recognized on an accrual basis, that is, it is recorded when realized or realizable. All revenue for the fiscal year should be recorded in that fiscal year, not when the payment is received.

In the case of a retreat, the revenue is recognized on the year the retreat was attended and not when the payment was received.

Discounts (such as retreat discounts, retreat assistance and scholarships) are recorded as a separate contra-revenue accounts, and not as expense accounts.   For example, when recording income for a retreat the cost of the retreat should be posted to the income account associated with the retreat income account.  The discount amount should be posted to a separate income account (Discounts which is a contra-revenue account) and will show as a negative amount when looking at the reports.  This will give you the net revenue while showing clearly the income and the discount lines.

Revenue must be recorded by creating a Sales Receipt under donations in QuickBooks and correctly assigned the revenue to one of the following revenue categories:

Donations are contributions made freely by the donor with no consideration. This means that the donor does not directly benefit from the transaction. For example, a “donation” to cover a specific individual retreat’s fee is NOT a donation as the donor chooses who receives the benefit, but rather this is simply a payment of accounts receivable. A donation to the scholarship fund does not directly benefit any specific individual and is therefore an acceptable donation.

Note that in order for a scholarship fund to be considered donations, scholarships must be awarded according to a formalized and documented procedure that explains the basis on which scholarships are awarded.

According to US GAAP, contributions can come in three major asset classifications: Unrestricted, Temporarily Restricted, and Permanently Restricted. To meet GAAP requirements, each entity must separate these funds.

When individuals give a priest money for celebrating a Mass, such money is a donation and not a stipend.  As a rule of thumb, institutions (Parishes, Corporations, etc.) give stipends while individuals give donations.  Donations are tax deductible but stipends are not.

Unrestricted donations are contributions made without any restrictions from the donor. They may be in response to a specific appeal, for example, for the annual fund, but are not legally bound by the donor for a specific purpose.

Temporarily restricted donations are donations that are legally bound by the donor. In this case, the donor specifically states that their funds have to be used for a specific project and cannot be used for any other concept. An example would be a donation meant for local Holy Week Missions. In this case, the donor is giving for the purpose of helping the local missions during the time frame of Holy Week. The funds would be maintained as temporarily restricted until the purpose is satisfied.

Permanently restricted items are also known as endowments. This means that the donor gives a lump sum of money of which the principal amount can never be used by the section or locality. However, the investment income generated by the account can be placed in operational income and used for the normal operational cash flow.

Gift in Kind donations are any gifts that are not in the form of a cash equivalent (cash, check, credit card). Any gift in kind should be valued based on the fair market value as of the date of the donation. For an instrument like a share of a stock, this fair market value is easy to determine. However, for an item that is difficult to determine, like a painting, professional appraisals may be required. Another example would be a gift card, which should be recorded as a gift in kind donation. For assistance in this area, contact the RC Activities National Office.

All other revenue should be recorded on an accrual basis. For revenue like bookstore income or merchandise sale income, the revenue is recorded when the cash is received (accrual and cash basis are the same in this case).

For any revenue types that are not cash basis, accounts receivable should be used. For example, if the section or locality sub-leases space to a third party on a monthly basis, the revenue should be recorded on the first of each month with a debit to accounts receivable and a credit to facility rental fees. When the funds are collected the process is to go to receive payments module and this will decrease the A/R listed on the balance sheet.

Expenses must be correctly assigned to accounts within one of the following categories:

Expenses should be recognized on an accrual basis. For most expenses, this means the use of an accounts payable system.

Expenses should be recorded as of the date the service was provided or when the product was purchased. In most scenarios, this means recording the transaction as of the invoice date. The exception to this is when you are trying to enter an invoice from a closed period (a past month in which financial reports have been submitted).  In this case the recommendation is to enter the invoice in the current period and make a memo noting that the correct month invoice should have been recorded.

Insurance payments should be held in Prepaid Expense and expensed January of the next fiscal year.

LEASE OF FACILITIES AND LEASEHOLD IMPROVEMENTS

If you are planning on making improvements to your facility or to lease a facility, please contact the RC Activities National Office prior to your project for approval.

The purchase of goods and services must follow the following guidelines:

A prepaid expense is an expense paid for in one accounting period, but for which the original asset will not be consumed until a future period. Examples of prepaid expenses are:

These type of prepaid expenses are paid in advance for multiple future periods. The bookkeeper should initially record this expenditure as a prepaid expense (an asset on the balance sheet) until it is consumed and when the asset is eventually consumed, it is charged to an expense account.

Internal Control Policies protect the assets of the Corporation, both local and national.  They represent a series of checks and balances. The following checklists provide guidelines for internal controls with cash.

The entity can maintain a petty cash up to $500.  Specific events could have higher amounts. All funds in and out of petty cash must be tracked in a register (each event needs their own), and receipts for expenses must be retained, signed by the users and their supervisors. All expenditures should be pre-approved.

All cash activity for the month on the G/L (all cash and bank accounts) must be reconciled with the monthly activity from the Bank Statement.

The Bank reconciliations should be completed for the following account:

Bank Reconciliation reports should be attached to month end bank statements for all these accounts.

A review of budget vs actual for the month being closed and year to date results (P&L) need to be validated with the Section Director and/or RC Local Director.

Administrators to notify the RC Activities National Office of any budget change requests after approval from the Section Director or Local Director.

Quarterly Financial Statements should be produced at the end of each fiscal quarter by the 10th day of the month.  These should include a quarterly P&L Standard (actuals vs. budget) and Balance Sheet at the bare minimum.  These should be sent to the account owner, RC Local Director and the RC Activities National Office with any pertainent notes. These reports should be kept on file locally in print and electronically.If you will not be able to close your books by the deadline, you should notify your RC Local Director via email as soon as it is known to avoid consolidated reports and analysis being done on incomplete/incorrect information.

A complete year end review of all financials should be completed by the bookkeeper and account owner.  Once any and all changes are made, and the books can be closed for the year, a year end financials statement should be ran and provided to both the RC Local Director and the RC Activities National Office.  This report should be kept on file locally in print and electronically. 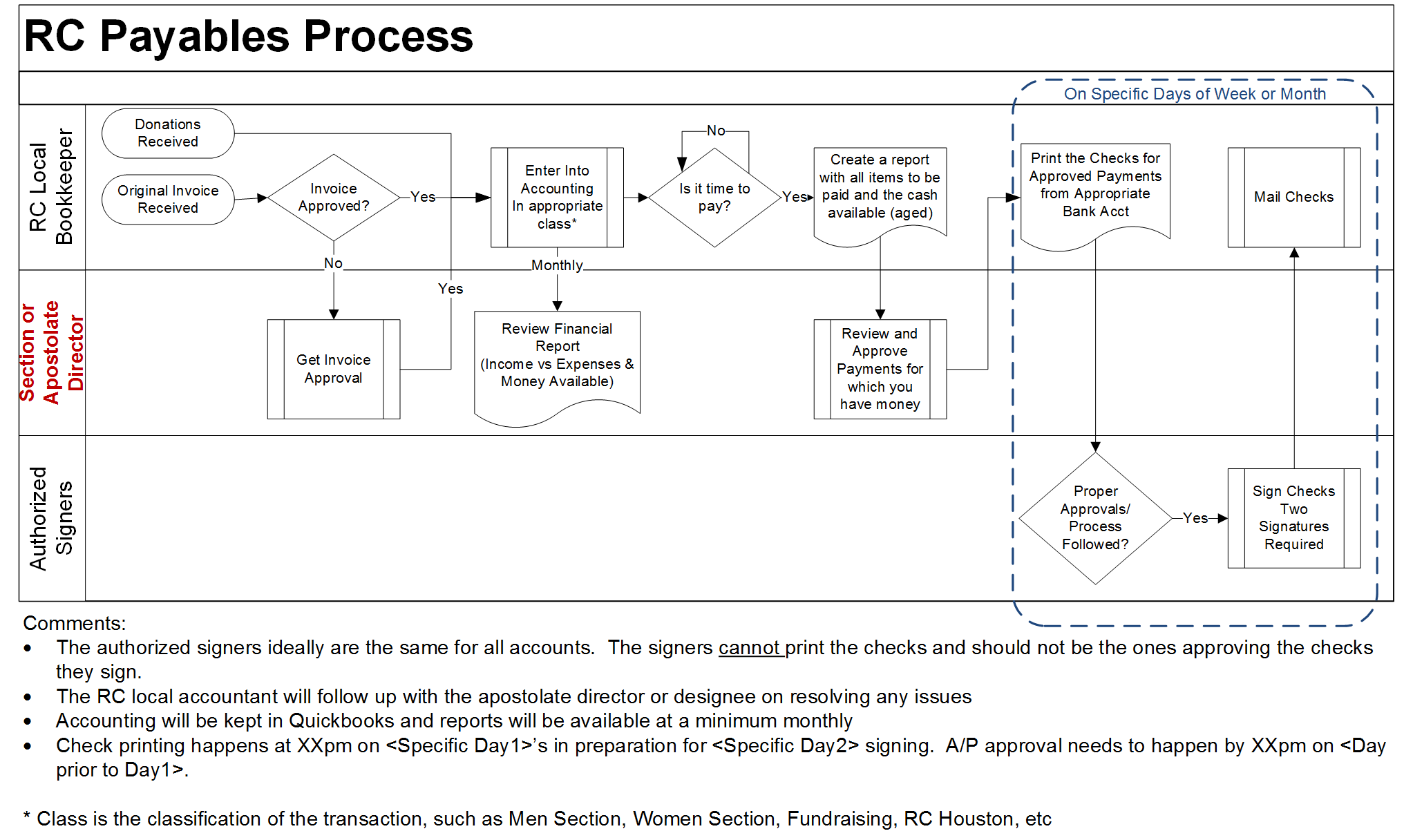 1. When is a bank account needed and justified to have it opened?

2. In which banks do we open bank accounts?

Currently RC Activities allows for each locality to choose the bank of their choice. (All except Wells Fargo may be used).  Limiting the use of just one bank per locality (for all sections) is ideal, especially when the moment arrives to have external audit for this corporation, it would be easier to manage if the number of banks we do business with is small in any given locale.

3. Requirements for a signer

7. Use of Merchant Accounts / Online tools

Designed by On Fire Media